For over 25 years this handsome host, magician and comedian has performed his hilarious interactive shows for thousands of companies, colleges, comedy clubs and casinos, coast to coast and border to border, covering all 50 states. Corporate clients have included Sony, Dell, Toyota, Lexus, Harrah’s, AT&T, Microsoft, Frito-Lay, Symantec, and the list goes on…and on!

Mike has been a game show host for numerous national clients and is in frequent demand as a Master of Ceremonies and Presenter. He even squeezes in time as a Ring Announcer for Mixed Martial Arts Contests in Las Vegas and recently shot an MTV special on MMA.

He isn’t just an outstanding solo performer. He is the founding member of Spike and Hammer, formerly Las Vegas’ most requested comedy magic team which has also played to thousands of companies and colleges across the country.

And now you have a place to catch Mike Hammer 5 days a week- headlining at The Canyon Club in the 4 Queens Hotel and Casino, by The Fremont Street Experience in Downtown Las Vegas.

Hammer was most recently seen on Penn & Teller: Fool Us on the CW. He has also been seen on A&E TV on Bad Ink and Barry’d Treasure starring Barry Weiss. Hammer is also regularly seen hosting radio and co-hosting on TV.

Mike Hammer was named by Esquire Magazine one of Las Vegas “45 Under 45”, honoring the most successful men, business leaders or executives in the Entertainment Capital of the World. 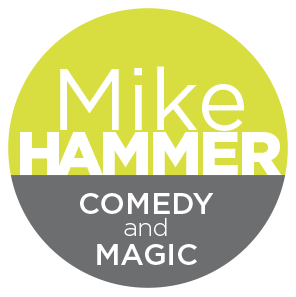